As 2022 closes out, hopefully you’ve embraced accounts payable automation. Bottomline research from our Business Payments Barometer shows that 32% of businesses are still stuck on Excel, and they’re undoubtedly seeing the economic, staffing and process efficiencies that come with moving from the analog era. But there’s another process improvement that has been very much in the news lately: invoice automation.

There are two reasons for invoice automation close-up. First, the Business Payments Coalition made waves about the issue at the recently-wrapped Association for Financial Professionals conference. It is promoting its effort to bring a more consistent process to what it calls e-invoicing, which it has tied to interoperability and standardization. Momentum has been growing for invoice automation across the world—about half of the EU and India will implement it within the next two to three years—and that’s especially true in the United States.

The development of invoice automation is mostly an unmitigated positive for companies, who get to scrap processes that haven’t really been efficient in decades or have become outdated and inefficient over time. However, it has also become clear that while companies might enjoy the benefits of automating everything from invoice receipt to approvals, this issue is complicated. More manual work may exist at the end of the invoice-to-pay process, just when you’re looking to settle the invoice. So, automation is essential as a process improvement. But let’s take a look at those complexities.

For companies still transitioning to automation, sanding away the rough edges of your invoice approval processes is welcome and would go some way towards workflow improvements. For both this group and the group that has already integrated AP automation, it’s essential to remember internal communication. And that’s important. When internal communication and collaboration are removed entirely from this process, the mistakes and slowdowns you intended to automate away can re-enter the picture.

It starts at the beginning. It’s easy to create a communication sinkhole at the front end of the invoice process if you don’t have intelligent ingestion and accurate data capture as part of the automated process. But as stated previously, the problems are more likely to happen at the end. Issues can crop up when it’s time for authorizations and payment processing.

You have rules set up to automate approval for a vendor we’ll call Rain Projectors. Your solution flags an incoming invoice that’s out of the norm, with an unusual quantity based on previous orders with the supplier. At this point, it’s either escalated to the approver on the record for consideration, or the invoice and purchase order will need to be circulated manually among staff for further conversation and agreement.

It’s easy for a straightforward process to get bogged down in these final steps. Whenever there’s an exception, it creates a time drain, despite the streamlining up to that point. ‘But what’s the solution?’ I hear you ask.

One area to quiz your AP automation provider is how they meld automation and communication to allow for streamlined approvals, even when a wrench is seemingly thrown into the process. To that end, automated AP solutions must offer a way to have necessary internal conversations within the solution. This conversational platform allows approvers and key stakeholders to collaborate within an invoice record, preventing that end-of-process slowdown described above.

Here’s an example of what this looks like in practice, from within Bottomline’s Paymode-X solution: 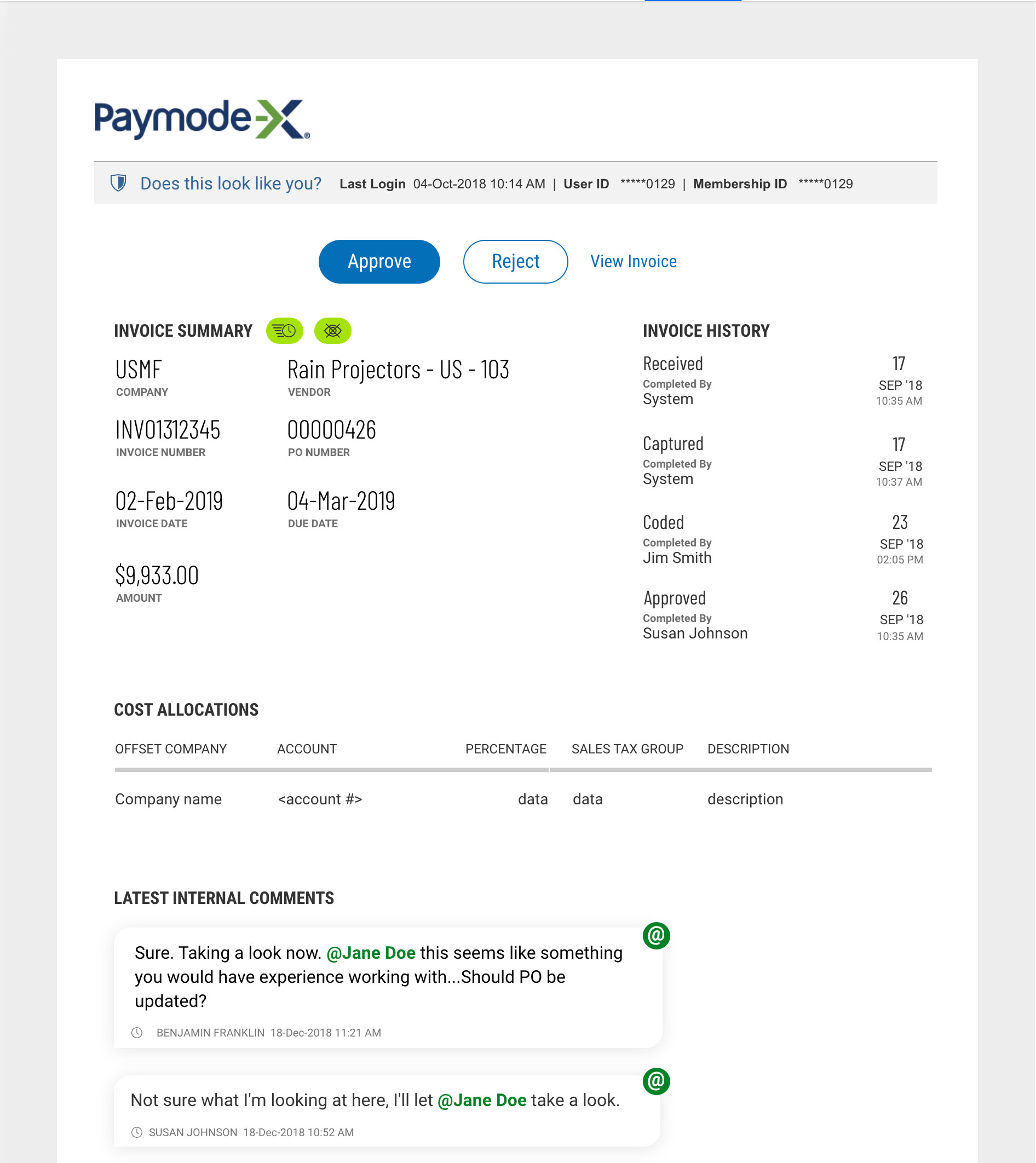 Users should be able to tag those colleagues who need to be notified of a change or a decision—the approver would be the most common use case. Automatically notifying tagged users via a system-generated email ensures that conversations aren’t missed, preventing delays and confusion from creeping into the process.

Ultimately, this saves users time and resources by simplifying approval conversations, preventing delays by waiting on others to meet or using the time-wasting practices of yesteryear. With centralized feedback on the invoice record, it’s easy to see supplier history at a glance and simplify any later exceptions or quirks.

See how we can drive your organization forward.