The ability to open accounts online has become a standard feature for consumers, but it’s less common for businesses.

According to a report from Javelin Strategy & Research, which surveyed 900 small-business owners in May, 12 of the top 24 banks in the U.S. offer digital account opening for business checking accounts — an increase from nine in 2019. Those dozen banks serve 58% of the small-business banking market.

The overwhelming majority of banks with $30 billion to $100 billion of assets that are prominent in business banking either don’t have this feature or offer it with limitations, such as reserving digital account opening for sole proprietorships only. And 56% of small-business owners still end up at the branch when opening checking accounts, compared with 27% who do so online.

“Even offering a digital application for business accounts is unique, let alone building one yourself as a smaller bank,” said Ian Benton, a senior analyst in digital banking at Javelin. 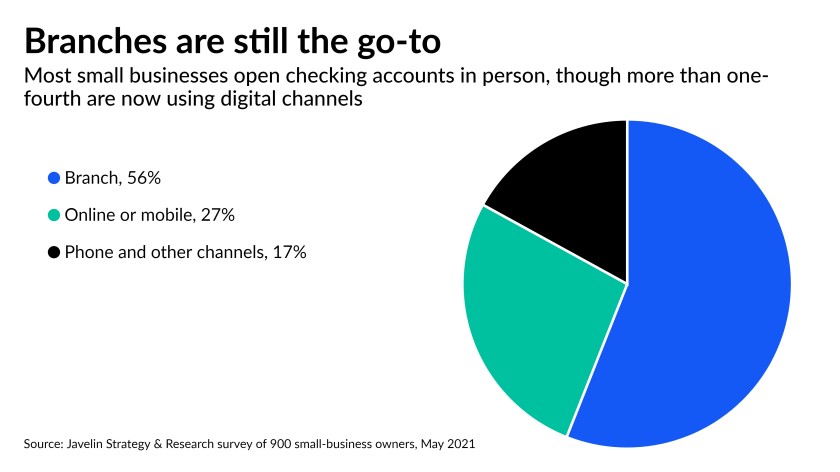 Sunwest specializes in commercial banking. Carson Lappetito, president of Sunwest Bank, was inspired to build the platform after a business owner said he was a customer of Wells Fargo because its branch was the closest by. “If we could have opened the account in our office, we would have,” the entrepreneur told Lappetito at the time.

“From that moment, we had a vision of offering online commercial accounts to customers,” Lappetito said in an email. “The execution was not easy; business accounts are complicated and have many nuances.”

Lappetito set the wheels in motion for the Sunwest New Account Portal, or SNAP, about two and a half years ago. He hired Dwight Flenniken III as chief marketing officer and then Matthew March as chief information officer, both of whom had backgrounds in technology and brought over their own teams of developers. The team that built SNAP had nine to 11 members at any one time.

The goal was to give customers a tool to open accounts on their own time. Sunwest decided to build it internally so its own employees will have firsthand knowledge on how to edit and adapt the portal going forward.

“We knew [SNAP] was going to be valuable for people,” Flenniken said in an interview. “As people don’t want to or don’t have time to come into the branch, we needed to make tools available to our clients and prospective clients that allow them to open their accounts whenever they want.”

Sunwest debuted a rudimentary version of the portal over the course of the pandemic, before the user experience and user interface had been fleshed out. The final product, which went live on June 9, lets business owners create multiple accounts and account types at once, add authorized account signers, and order checks and check scanners. Flenniken said a mix of new and existing customers have opened accounts using SNAP since its debut.

“The commercial account opening processes could be laborious. Before this platform, we were able to open commercial accounts within a few days,” Lappetito said. “With SNAP, we now have the capability to open accounts in minutes.”

Piecing together a digital account-opening product for small businesses is rife with complications, especially compared with the consumer checking account-opening process. According to Benton, these complexities include performing know-your-customer and credit checks if there is a loan involved. There’s a need to upload documents, involve additional beneficial owners and signers in separate application flows, fund the account, onboard to digital services, grant permissions for employees to access the account and make payments, and more.

“Frequently the business applicant will have questions, so you need to build in ways for them to speak with a banker,” Benton said. “And they’re typically doing this over multiple sessions, sometimes starting at their place of business with a bank relationship manager, or in the branch, and finishing later online, or vice versa.”

Flenniken acknowledges that these all posed challenges that sometimes took months to work through. For example, cash-heavy businesses trigger different compliance concerns than those that are less dependent on cash.

For now, SNAP is available for customers in the four states in which it operates, Arizona, California, Idaho and Utah. The bank plans to expand access to other Western states in the future.

The Future of Customer Experience in Banking is Personalized

Will Fintech ‘Save the Day’ as USA Struggles with Corona Stimulus?

See how we can drive your organization forward.